On my bookshelf, nine unique and quite remarkable books from 2015 to review (and haven’t) - still on the bookshelf, overlooked until now, months later.  Perhaps there is some forgiveness within their belated presence within this, and upcoming, posts. . .  so, my friends, let’s begin.

Amidst all that was 2015, two of our neighbors, Lucia and Steven, quite active 80-year-olds, gave me the books each had written. . . I was up until sunrise immersed in both of them. 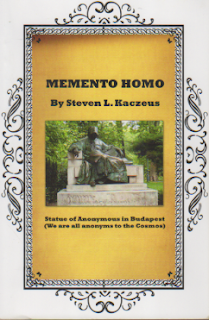 Briefly, Steven, growing up in Hungary, was a freedom fighter: attended the Technical University in Budapest (the first and finest university in eastern Europe, which I didn’t know), an author of the student manifesto declaring Bulgarian independence from foreign soldiers and a communist regime, made and threw molotov cocktails at tanks during street battles, helped dig 200 fellow patriots out of a cave they had been sealed in, deeply loves the Danube River - (Stop! Curb the enthusiasm!)  After moving to America with Lucia, he became a Silicon Valley stalwart with 17 patents and numerous technical articles during the early phases of America’s computer explosion.  Beyond fascinating, both his and Lucia’s books.
MEMENTO HOMO by Steven L. Kaczeus
Memento Homo is a latin phrase for “Remember Man”
ISBN 978-1-4520-3275-7

Lucia grew up in Rome during WWII, and, within each chapter of her recipe book, she describes those days, including the Italian recipe her mother taught her as each day unfolded - an example, her father, blinded during military service in WWI, was Secretary General of the largest prison in Rome, and incarcerated all his Jewish neighbors, 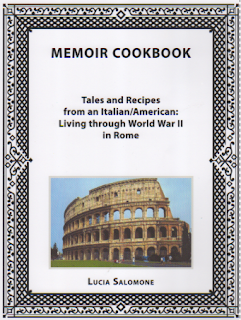 knowing Fascists and Nazi sympathizers wouldn’t think to search jails for concentration camp victims - another chapter includes the recipe Lucia’s mother taught her as she played with the children of these same incredibly fortunate folk.

MEMOIR COOKBOOK
Tales and Recipes from an Italian/American:
Living through World War II in Rome
by Lucia Salomone
from AuthorHouse

onward! and eagerly so!

Frosty, Tama, how are we doing?
'onward! and eagerly so!
also, treats await everyone!'

As a young boy, I loved spending summers at my maternal grandparents rural Wisconsin farm, where they grew strawberries and watermelons, my grandfather, also a lumberjack (you betcha, nirvana for this kid).  Their two fields, among the woodland distant from the farmstead, had outhouses, which, of course, I also used.   Clinging with my right hand to the high seats so as not to fall off, I would read the assorted magazines (old Saturday Evening Posts, Farmer’s Almanacs, diverse mail-order catalogs) using my left hand, logistics of which meant flipping pages from back to front.  To this day, whenever browsing through magazine or book, wherever I am, it’s from back to front, stopping when something catches my eye.  And, from back to front is how I read George Held’s latest, Black Splendor Poems, on the couch, from back to front, twice before setting it down.  And, re-read it back to front the next morning. 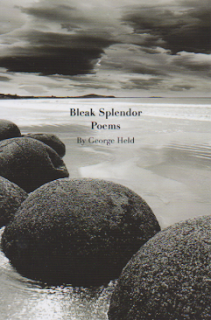 Fly straight out as the wind shifts.
From SSE to WNW
And September heat-wave
Yields to promise of fall. . .

At the end of the Little Dipper
We want to feel content,
But that black banner with white
“POW/MIA” reminds us that Nam
Still roils the countryside,

And Iraq, where it’s early
Morning now, stretches
Before us like the lowering
Sky, while the rope bangs the pole,
And clouds cover the Pole Star.

George is a longtime friend, I’ve appreciated him/his poetic presence/friendship over many years.  He’s a rare and gifted poetic gem, and this collection of poetry, again, is even further proof-positive (and it doesn’t really matter in which direction one chooses to read it).

'time for treats?'
you betcha, beloved ass't ed's - three fascinating books from Steven, Lucia, George, and now, it's treats for all of us. . .