from the back cover: ‘This memoir of a sixties survivor has become a haiku/haibun classic and an oft-quoted reference for the heady ferment which was the tail end of the 1960s.’
Holy smokes, Canadian Chris, completely immersed in 60’s hippeedom, especially in England, kept his head while immersed in the dharma of legendary 60’s scenes, including Eel Pie Island, Twickenham - a Beatle, the Rolling Stones, trips, free love, banshees, music festivals, hobbits, and, through all of it, the creation of beloved haiku/haibun - and, am delighted that Chris and his dog, Chase, are now friends of ours ('us, too', state ass't. ed's
Tama and Frosty). . .

Leeks and eggs
smoke drifting over 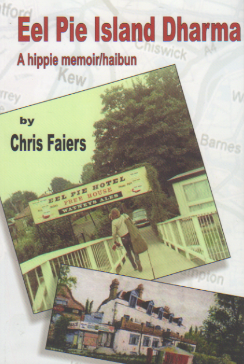 LSD
these clouds reveal
too much moon

Totally cool!  Plus!, a collection of haibun from Chase and Chris:

Zen/First Nation shaman/poetic/country retreat center on the Crowe River, near the Canadian Shield, Canada - here are but two delightful of Chris's Zen River haibun, brief journeys into the poetic persona of beloved land he and Chase live on/within. . .
The late summer day was perfect for a relaxing suiseki stone hunt in the dry fall riverbed. . . I noticed Big Blue the heron standing on the exposed chain of rocks I had intended to explore. 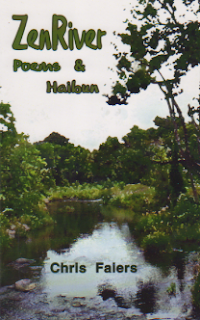 blue heron on my rocks
thinking of fish

coexisting
heron and I
exchange stares

These lighthearted reflections on fireflies and their rituals inspired this final poem.

Zen monk
playing hide and seek
with his soul

asst'. ed'.s, asking,
"maybe we can visit Zen River?"
how about treats and
belly rubs as we think about it?
"far out!"